The Chicago Maritime Museum invites you to an in depth presentation on the four sailing vessels that came before the storied Le Griffon.  Maritime historian Richard Gross, will identify and describe the first five decked sailing vessels that the French constructed on the Great Lakes as well as the changing purpose of these vessels throughout their short life span from 1673 and 1689.

Gross has been actively involved in researching the history of the explorer Cavelier de La Salle since he was selected to be a member of La Salle Expedition II in 1975. From August 11, 1976 to April 9, 1977 he and 22 other participants, authentically retraced La Salle’s expedition of exploration from Montreal Canada to the mouth of the Mississippi River in celebration of the US Bicentennial. Using period documents, he has spent many years unraveling the myths and confusion surrounding all aspects of La Salle’s activities in the Midwest. Richard has a BA in Biological Sciences from Southern Illinois University at Carbondale and a Master Degree in Education with an emphasis in Biology from Roosevelt University, Chicago. He taught high school Biology and Chemistry for 20 years.

The presentation is $5 for members and $10 for non-members. However, you might just consider joining the CMM for an annual membership of just $35, which provides unlimited visits, access to our monthly newsletter and special events such as the Third Friday maritime lecture series. ﻿﻿Join us at chicagomaritimemuseum.org or call us (773) 376-1982. We are located on the lower level of the Bridgeport Art Center at 1200 W 35th Street. Parking is free in the north lot.

If you are unable to join us in person, register for the Zoom presentation by clicking here. 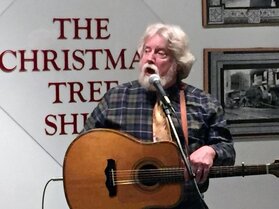 Join us for a holiday concert with renowned maritime folk singer, Lee Murdock, commemorating the turn-of-the-century tradition of carrying Christmas trees to ports on the lower Great Lakes. This was the final cargo of the season during the lumber schooner days, after the last of the logs from the northern forests were hauled south to build the cities of the Midwest. The Rouse Simmons was but one of many ships hauling this cargo, though perhaps the most famous and beloved ship of her day.

The Christmas Tree Ship is a seasonal exhibit featuring a model of the Rouse Simmons on loan from Grant Crowley. 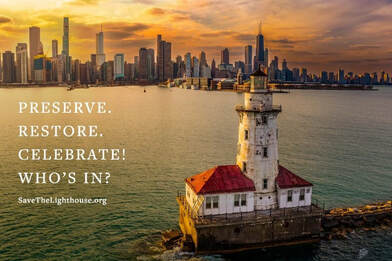 Historically, Chicago was the greatest port of the Great Lakes. The development of a network of lighthouses and minor navigational aids was critical to the city’s economic development. Changing technology and changing patterns of maritime commerce have resulted in lighthouses being established, decommissioned, and removed from the coast of Chicagoland. This illustrated lecture on November 18, by Chicago history professor Theodore J. Karamanski, PhD, will review the lighthouse history of the Illinois shore of Lake Michigan with a special emphasis on the Chicago Harbor Light and the dilemmas raised by the troubled state of its current preservation. Ted Karamanski, is Professor of History and Director of the Public History Program at Loyola University Chicago.

Third Friday Lecture Series: October
US Coast Guard's Valerie Van Tine
The United States Coast Guard is noted for many accomplishments, but foremost in the public’s mind is the service’s efforts in helping those "in peril upon the seas." The U.S. Lighthouse Service, for example, maintained lighthouses and sea markers to warn ships from danger. When the RMS Titanic sank in the North Atlantic in 1912, the international shipping community’s collective eyes were opened to the immediate necessity of creating regulations dedicated to ensuring the Safety of Life at Sea (SOLAS).
These are just a smattering of the Coast Guard’s responsibilities. Learn about the history of the organizations that would eventually combine to form the modern Coast Guard presented by Marine Science Technician 1st Class Valerie Van Tine this Friday, October 14 starting at 7:00 p.m. at the Chicago Maritime Museum.

MST1 Van Tine was born and raised in Traverse City, Michigan. In her 14 years in the Coast Guard, she has been stationed in the Gulf of Mexico in Louisiana, the Pacific Northwest in Seattle, and most recently on the Atlantic Coast in Charleston, SC. Since returning to the Great Lakes region as a Coast Guard recruiter this summer, she has enjoyed visiting art and science museums in Chicago and spending time on Lakeshore Trail.

​In conjunction with the Bridgeport Art Center's Third Friday Open House, the Chicago Maritime Museum opens its doors for lively presentations on maritime history and current events each month. Come early and explore the many artist's studios in the building and our newly renovated museum.
This month's presentation is free to all. But you might just consider joining the CMM for an annual membership of just $35, which provides unlimited visits, access to our monthly newsletter and special events such the Third Friday maritime lecture series.
​
Register here or call us (773) 376-1982. We are located on the lower level of the Bridgeport Art Center at 1200 W 35th Street. Free parking in the north lot. 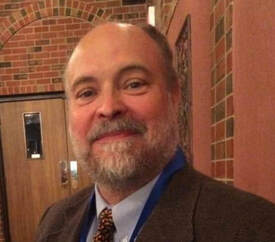 With that, for the first time in history, people had journeyed around the world. Like the first controlled atomic reaction on December 2, 1942 or the first moon landing on July 20, 1969, these milestones of human achievement warrant our understanding.

Missed a Third Friday Lecture?
No worries, watch them here!